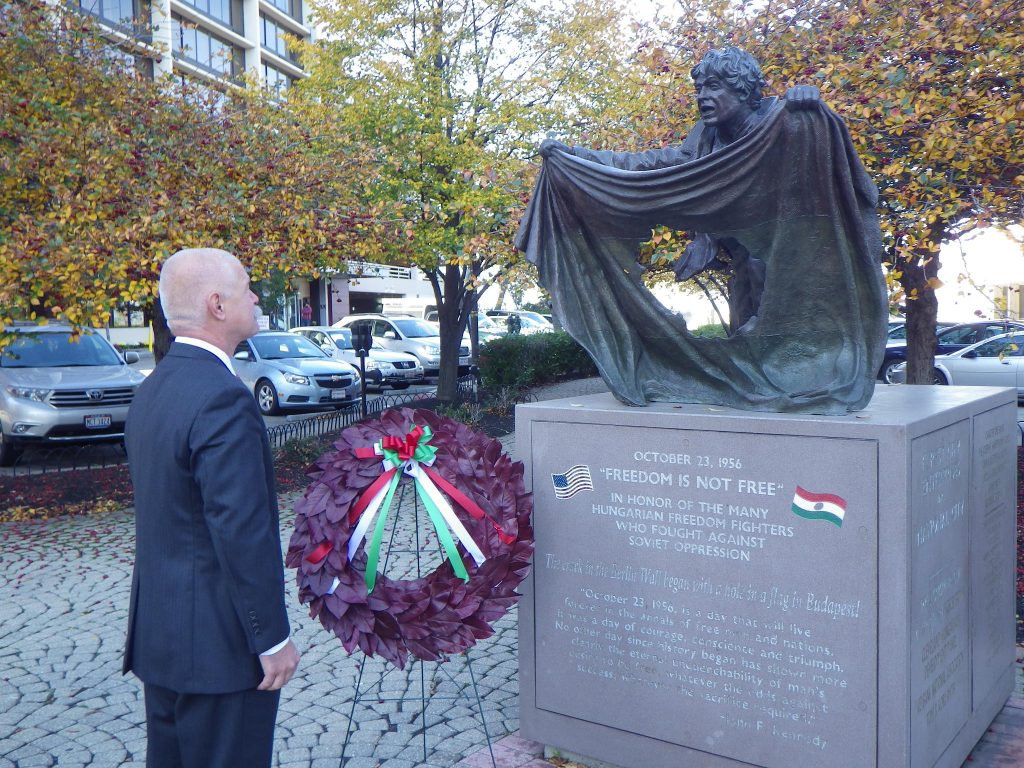 On October 19, 2014, the greater Cleveland Hungarian community remembered the events of Hungary’s 1956 revolution.  The day began in downtown’s Mindszenty Plaza where Dr. Janos Csak, the Hungarian ambassador to England from 2011 to 2014, laid a wreath at the statue commemorating 1956.  His son Máté also was in attendance.  Later, at St. Emeric Church, Csak gave the keynote address at the program remembering 1956 which was sponsored by the United Hungarian Societies and the Cleveland Hungarian Heritage Society.

The afternoon’s commemoration began with the singing of the American and Hungarian national anthems accompanied by Miklos Peller on the organ and an opening prayer by Fr. Andras Antal, pastor of St. Elizabeth of Hungary Church.  The program included songs by the St. Emeric Choir and also the West Side Hungarian Lutheran Church’s Little Hungarian Choir under the leadership of the Rev. Zoltan Tamasy and organist Marton Tamasy, poems about the events of 1956, and a presentation by the boys of Hungarian Scout Troop 14.

The program, which was hosted by Erika Chmielewski, Hungarian Scout Troop 34 patrol leader and representative of the Hungarian War Veterans Association, concluded with the singing of the Szozat and the Szekler Hymn.  Following these events, with the accompaniment of coffee and pastries in the church’s downstairs hall, an exhibit in photos and print of the 1956 revolution was presented by Andras Lazar, curator of the Cleveland Hungarian Heritage Society’s museum, and Imre Bogardy, a refugee from 1956 Hungary.