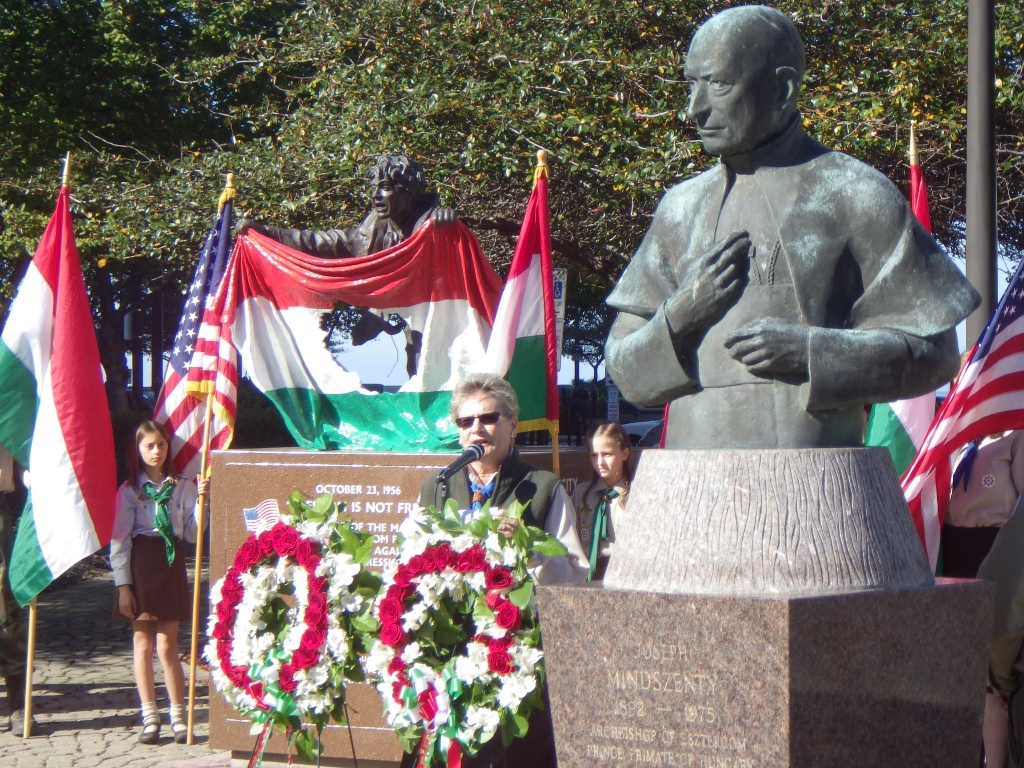 Cleveland’s Hungarian scouts participated in the many commemorations for the 60th anniversary of the 1956 Hungarian Revolution and Freedom Fight. Initially, on Oct. 20, 2016  members of the Hungarian Scout Folk Ensemble escorted the presentation of the flags at the reception held by Cleveland Mayor Frank Jackson at city hall in honor of the events of 1956. On Oct. 23, the Hungarian flag presented to the scouts last year by Hungary’s Parliament Speaker László Kövér, and which flew above the Parliament Building in Budapest, also flew over city hall.

At the same time, two streets down from city hall, nearly 100 people gathered at Mindszenty Plaza for a wreath-laying ceremony sponsored by the United Hungarian Societies (UHS). The scouts presented the flags at the 1956 memorial and the Cardinal Joseph Mindszenty statue. After the singing of the United States and Hungarian national anthems, Cleveland District Commissioner Andrea Vareska-Meszaros gave the keynote address and scout Julian Balassy from Hungarian Scout Troop 14 recited a poem.  1956-ers Steve Kekedy and Scout Leader Thomas Ratoni-Nagy with the assistance of Assistant Troop Leaders Hanna Szentkiralyi and Keve Pigniczky laid wreaths at the statues. The program was directed by the Hungarian Scout Association in Exteris International Commissioner and the American Hungarian Friends of Scouting Executive Secretary Michael Horvath.

After the wreath-laying ceremony, at 4 p.m. at St. Emeric Roman Catholic Church, the scouts presented the flags of the U.S. and Hungary and the four scout troops’ flags along with some other organization’s flags at the “Legacy of Freedom” concert sponsored by the UHS. The main performers at the concert were the 50 member Cleveland Women’s Orchestra which performed Hungarian works by Liszt, Kodály, Erkel and Brahms. After the concert, attended by about 400 people, a reception was held with food and drinks in the Church hall for all those in attendance.

All the programs were a fitting display and remembrance in tribute to all the heroes of 1956.

Click here to see pictures from all three 1956 events.

Click here to see pictures and videos of the wreath-laying ceremony.

Click here to see pictures and videos of  the city hall ceremony.