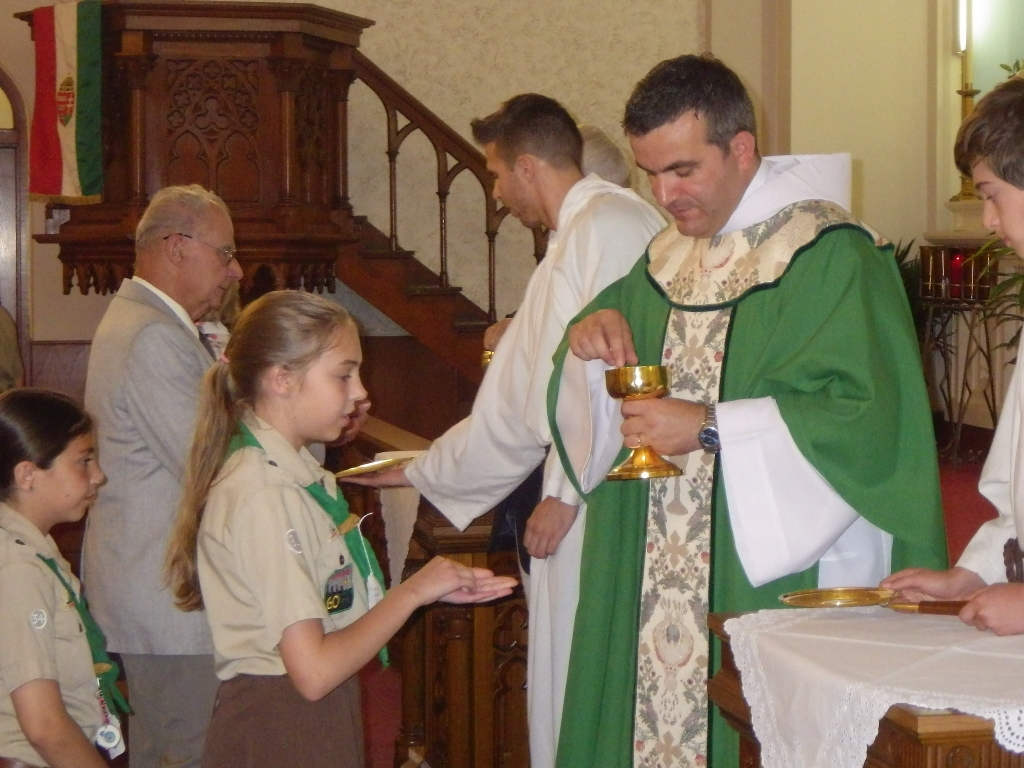 On Sunday morning, July 5, 2015, Fr. András Mezei was welcomed by the St. Emeric Roman Catholic Church congregation for his first mass at his new parish. Fr. Mezei, who is now also the landlord for the Hungarian Scouts and their Scout Center, was greeted by many scouts in attendance. He was born in the Szekler region of Romania and has come to St. Emeric Church via Hungary to tend to the spiritual needs of Cleveland’s Hungarian catholic community. Fr. Mezei briefly introduces himself here:

My name is András Mezei, I was born in Gyergyóditró, which is in the Szekler region of Transylvania. I am the third child of my parents and have an older sister and an older brother as well as a younger brother. Our father died in 1988,  and our mother raised us by herself.

I had a happy childhood.  I enjoyed serving Mass.  The idea of becoming a priest became a recurring thought even then and probably  played a role in my eventually becoming one. I completed my theological studies at Blessed Gizella Seminary in Veszprém, Hungary. After my ordination in 2008, my first assignment was in Keszthely, where I served  for five years before I was named pastor at Csabrendek.

Now Providence guided me to Cleveland, where, judging  from  my brief experience and observation, there is great need for pastoral service. I ask all Hungarian bretheren of good will, to pray for blessings for the success of our joint missionary endeavor.

Pictures of the mass and reception afterwards may be viewed here.

Miklos Peller’s report, in Hungarian, about the day’s events can be read here.