Vilmos Bardossy passed away at 92

Scout leader Vilmos Bardossy passed away on January 6, 2015 at the age of 92.  Bardossy was scoutmaster of Cleveland’s Hungarian Scout Troop 14 from 1953 to 1955.  He was the troop’s second scoutmaster. 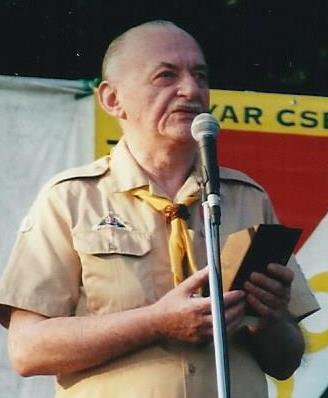 In 1951, Bardossy was the Secretary of the newly formed Hungarian Scout Association in Exteris headquartered in Garfield, NJ.  He was its Executive Secretary from 1957 to 1959.  For many years Bardossy was an instructor at the organization’s leadership training camps in 1957-59 and 1976-1993.  His specialty was teaching young leaders about the HSAiE’s rules and regulations.

He was a longtime supporter of the Cleveland Hungarian scout troops’ sponsoring organization, the American Hungarian Friends of Scouting.  Bardossy was one of the organizers of the initial Hungarian Scout Festivals and Benefit Balls.  In 2000, the AHFS awarded him its Lifetime Achievement Award for his many years of service to the Hungarian scouts of Cleveland.

About 50 uniformed scouts, standing at attention, saluted him at his funeral mass.  He is mourned by his three daughters Elizabeth, Victoria, and Maria, all of whom were once scouts in Hungarian Girl Scout Troop 34.  May he rest in peace.