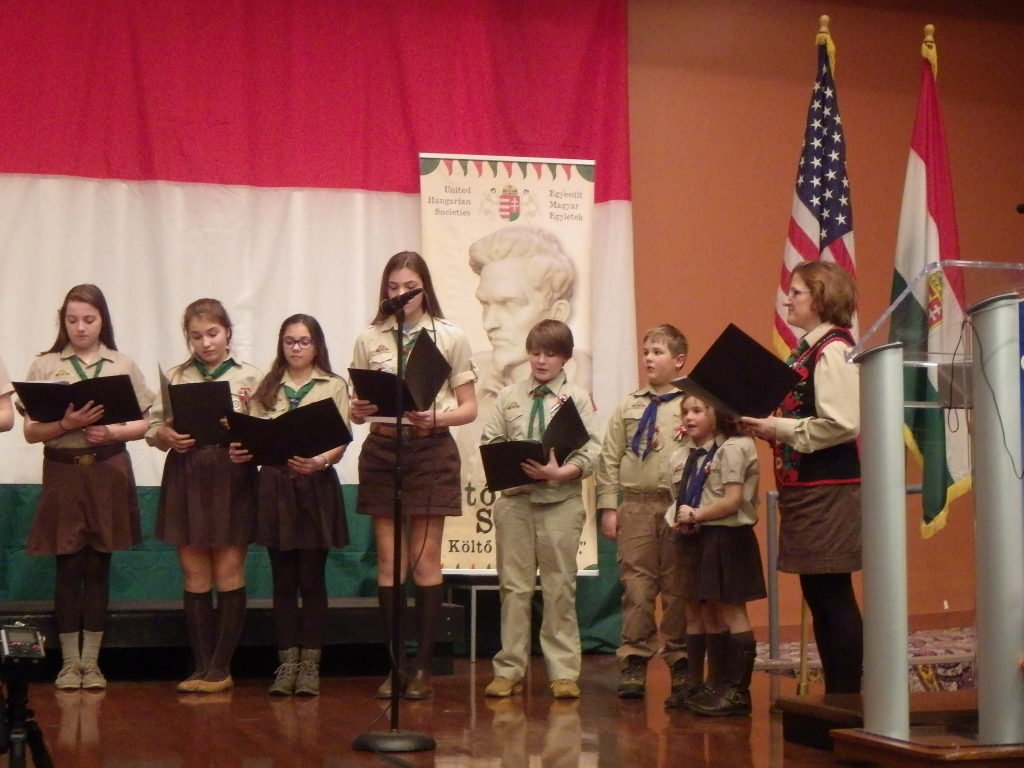 Cleveland’s Hungarians commemorated the 1848 Hungarian freedom fight with a program organized by the United Hungarian Societies on Saturday evening March 11, 2017. A new venue for this event this year was the downtown location of the Cleveland Public Library. On the library’s third floor hall, a wreath laying ceremony took place at 5:30 p.m. at the statue (bust) of Hungarian poet Sándor Petőfi. In front of about 100 guests, a wreath was laid in his honor by UHS President Valeria Nagy-Rátoni, who is also the troop leader for Hungarian Scout Troop 33, and by Dr. Ádám Márkusfalvi-Tóth, Acting Consul General at the Consulate of Hungary in Chicago.

The commemorative program began at 6 p.m. in the library’s auditorium. Krisztina Pethő, an intern from Hungary serving the Cleveland Hungarian community, and Eszti Pigniczky, Leadership Training Commissioner for the Hungarian Scout Association in Exteris, expertly hosted the program in Hungarian and English respectively. The American flag was presented by Julian Balássy of Hungarian Boy Scout Troop 14 and the Hungarian flag was presented by Kinga Turoczi of Hungarian Girl Scout Troop 34, after which the United States national anthem was sung by the more than 150 people present.

The program included Sándor Veres reciting Sándor Petőfi’s poem, “National Song”; a musical performance by the Seventh-day Hungarian Adventist Church’s youth orchestra; a March 15, 1848 commemoration by the scouts from Troops 14 and 34; István Hargitai reciting another of Petőfi’s poems; and a performance by the new 30 member Cleveland Hungarian Churches’ United Choir. The keynote speech was given by Dr. Ádám Márkusfalvi-Tóth.

The wonderful program concluded with the youth orchestra and the choir performing Mihály Vörösmarty’s “Szózat” and all in attendance singing the Hungarian national anthem. Afterwards, a reception in the auditorium’s entrance hall was held with delicious appetizers and desserts served to conclude the evening’s activities.

You can see pictures from the commemoration programs here.